Last week brought news that another trade publisher was dropping print. Penton Technology Media Group announced that all of its magazines would go digital-only as of May 2012. . A quick Google search lists at least two other trade publishers – Ziff Davis Enterprise and Linux Journal – that have stopped printing magazines in the last six months.

By dropping their old distribution method, these magazines will cut their operating costs significantly. But I’m not sure that the raison d’être for trade magazines – to deliver hard-to-find, specialized information to a qualified readership – still exists. 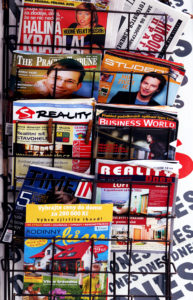 I find myself relying less and less on traditional publishers to collect and package articles that meet my needs and preferences. This function – the buzzword for it is curation – is helpful, even essential. It’s just that I don’t need trade publishers to do it anymore.

If I’m looking for details of a specific news event or a feature article on a specific topic, I can usually find it quickly by using Google search. For more in-depth information, curated by an expert on a topic, I might search Apple’s app store. For example, in researching information for a trip to Costa Rica for later this year, I’ve become overwhelmed by information from Google searches. I needed a better filter, so I downloaded an iPad app based on a tour guide written by a respectable, though not necessarily widely known, travel writer. The reviews sounded good and, for four bucks, what did I have to lose? The app was very helpful.

For information that I’m not searching for but that would interest me, I rely on my social circles. Online, that means my social media – primarily Twitter and Facebook. After all, by their very nature of being my followers, followees and friends, these people share at least some of my interests. These folks, not some impersonal publisher, are my curators. And the more I plug into to them via social media, the better information I find. This realization crystalized for me last week when John Bethune, a journalist and new-media editorial consultant I follow on Twitter, tweeted about his “New-Media Survival Guide: For Journalists and Other Print-Era Refugees.” The self-published book is available from several sources, including Amazon.com, both as a paperback and an e-book.

I’m a print-era refugee (although I prefer the term bilingual – I speak both analog and digital), and I’m always scanning for information that’ll help me keep up with the latest in social media and digital publishing trends. But it takes a lot of time to wade through the information stream to find the most valuable golden nuggets. Bethune’s guide has done a lot of the panning for me already. It may not deliver all the gold, but it gives me a map that shows where some of the richest veins are.

Through his blog and social media activity, Bethune is building his own qualified circulation. A trade-publishing colleague of mine recently gave me an example of how social media can enable this. “With LinkedIn Groups, you have a self-qualifying, self-assembling and self-maintaining list of people with a common interest,” he said. “It’s the equivalent of a magazine’s mailing list, and you don’t pay a thing for it.”

Indeed. When individual writers can establish their own brands, build their own readership and publish their own apps and articles, what’s left for traditional publishers? Tell me, if you know.

Postscript: Interesting comments by Warren Bimblick, senior vp of strategy and business development at Penton Media, at a recent roundtable on “The New Influencers of Content Creation,” hosted by Folio Magazine:

“In fact the b-to-b controlled circulation model is all about a social community. What it really is about is finding 47,262 people who all qualify and about whom you know tons of information and you give them content in the way they want it, which means asking them. And for some reason yet again the industry is going out to Facebook and LinkedIn, when in fact we own these communities.

My soapbox right now is to keep the communities to ourselves, because we are the qualified people to run them. That said, if I were 30 years younger and an editor, I would be checking every day to see who is following me. It is fascinating what you can use social media for. Not just for pushing content out but for product research, and so on.”