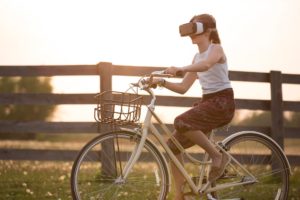 Last fall, writer Jordan Belamire donned a headset and began playing the multiplayer virtual reality game QuiVr. She was having a great experience. “Never had I experienced virtual reality that felt so real. I was smitten,” she wrote on Medium. “I never wanted to leave this world.”

Things turned ugly however, when the hand of one of the other players started wandering and Jordan was “virtually groped.” Even though she emphatically told the other player to stop, and tried to get away, the virtual hand chased her. “It felt real, violating,” the victim wrote in a post on Medium. “The public virtual chasing and groping happened a full week ago and I’m still thinking about it.”

VR is almost ready for prime time, but is prime time ready for it? For consumers, the cost of headsets are coming down quickly. Just last week, Facebook announced a new headset, called Oculus Go, for $199. And VR technology, along with its sister augmented technology (which superimposes digital information on the real world), is not just for gamers anymore. Companies are using the technology in training, recruitment and manufacturing applications.

But as Jordan’s experience shows, VR raises some disturbing questions. Was that groping an actual assault? Could the real person whose avatar groped her be charged with a crime? What kind of protections should VR vendors include to keep such things from happening? These are legal gray areas that companies and attorneys are starting to ponder.

“Research suggests that people respond physiologically to an attack in virtual reality as if it were real,” said Mark A. Lemley, William H. Neukom Professor of Law at Stanford, in a recent talk based on a working paper by him and Eugene Volokh, Gary T. Schwartz Professor of Law at University of California, Los Angeles. “The elevated heart rate, the fight or flight response, the sweat, the heightened perception, triggers in virtual reality if someone, a zombie or another person, is attacking you.” Even if people know intellectually that virtual reality isn’t real, “our bodies behave as if it is.”

Questions of property and trespassing are complicated as this technology blends the virtual and the physical worlds. If I sell a coveted magic sword outside of the game platform – on eBay, for instance – is that theft? In 2013, a man was convicted after he stole virtual items like swords by hacking into gamers’ profiles, then sold the virtual goods for money. The conviction, however, was not for theft, but for hacking. Is it counterfeiting to create my own sword for that game by writing my own code? Is geo-tagging a real location in a virtual game some kind of trespassing? If my game geo-tags Trump Tower in New York City, can he sue? What if my house is geo-tagged and suddenly I have a bunch of gamers in my front yard? When a Wisconsin county tried to require a game publisher to get a special use permit if its app sent players to a county park, a judge threw out the law as unconstitutional. (The game publisher’s argument that it was a violation of free speech won over the judge.)

There will be a certain “creepy” factor as VR technology becomes more common in daily life. Imagine, for example, “a near-future world in which I’m going to be able to walk up and say hello to you and my glasses are going to remind me of your name and your spouse’s name and your kid’s names and maybe the last time we got together,” said Lemley. That may be fine if we already know each other. But what if a perfect stranger can do that? Between VR, facial recognition technology and publicly available data, it’s conceivable, say some legal scholars. Definitely creepy, but is it an invasion of privacy? Are there laws against it, or should there be?

At the heart of all these questions it a very basic one: How much of virtual reality is real? As the technology goes mainstream, the public and the law will be forced to find an answer.