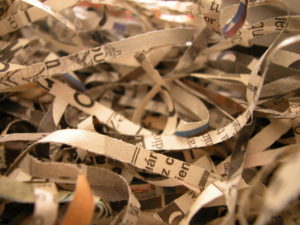 Recently, I sat through a 90-minute presentation on “Who Needs Newspapers?” at the National Press Club. The presenters, both retired journalists, never really answered that question. Rather, they spent the time telling the audience how they had toured the country, interviewing editors and publishers to find out how newspapers were changing. They showed videos of some of the interviews, presumably those they considered among the best. Predictably, the editors said newspapers aren’t dead, of course newspapers will survive, but none of them could say how.

I was amazed. The National Press Club is an insular place, but when I saw the provocative title of the presentation, I thought I might hear some interesting ideas. Instead, I heard last-century journalists preaching to the choir about how their industry was not dying. And how did they know this? They asked newspaper editors.

When the Q&A started, no one challenged the idea that you could get an accurate diagnosis from the patient. No one pointed out that the journalists in this case had not even attempted to get a balanced story. It’s obvious that those with a vested interest in the status quo are going to defend it. In fact, the president of the American Press Institute was the first to raise his hand, stand and defend the health of the industry. He proclaimed that the newspaper business is a $35-billion industry, while in the same breath admitting that only four years ago it was a $70-billion industry. No one batted an eye.

In fact, the latest figures I could find (by doing a quick Google search) reported that more than 15,000 newspaper jobs were cut in 2009 alone. That’s undoubtedly accelerated. A 2009 report from the U.S. Bureau of Labor Statistics put publishing and printing among the job categories with the biggest declines. Newspapers, periodicals and books are projected to lose 120,000 jobs between 2008 and 2018. The printing business is projected to lose 95,000 jobs.

The people at the Press Club meeting insisted that newspapers would survive, but I doubt that. The news will survive, but how the public consumes news has already changed radically. Certain news organizations may survive, if they can adapt to the new technologies and find new business models. Some will; some won’t. But news organizations have to get beyond the old assumptions that went along with the “print tradition.”

I asked one question during the Q&A session, pointing out how young people do not read newspapers (at least in paper form) and asking whether/how that threatens what’s left of the future of newspapers. Their answer meandered around the issue but didn’t address it. Frankly, I was reluctant to be more aggressive. No one else was asking any challenging questions, including the college journalism students sitting behind me. (After the meeting they told me they do read newspapers, but almost exclusively online.)

The experience reminded me of an essay in The Economist last month titled “Think again: Your competition is not who you think they are.” The author, tech entrepreneur Naveen Jain, points out that executives are often so busy fretting about what’s going on in their own industries that they are blindsided by larger forces at work in the world. “We live in transformative times, and we can thank exponentially powerful technology for this development,” he says.

That’s true in spades for the newspaper business. Unless newspaper executives broaden their perspective, they “may not see the stealth innovators who are quietly harnessing technology advances to displace your business,” writes Jain. While publishers fret about the future of newspapers, companies like Google and Apple are figuring out profitable business models for distributing information. In fact, during the Press Club meeting someone mentioned how Craigslist has decimated classified advertising. There was no discussion of how or why.

To overcome this insularity, news organizations and journalists should follow three suggestions by Jain. (I’ve taken the liberty of adding my own interpretation for the newspaper industry.)

• “Expand the circle of events you attend, or experts you consult, far outside of your market space. When you listen to the buzz only within your industry, you tend to hear about the same businesses and innovations over and over again.” Translation: pay more attention to how technology is changing the world. While you fret about how long real paper will be used to distribute the news, the smartphone and iPad are eating your lunch.

• “Go to visionary events that look at innovation from many different angles, and don’t restrict the discussion to a specific industry.” Translation: Stop focusing on how changes are hurting your business. Rather, look for new ideas and fresh minds that will broaden your perspective.

• “When you expose yourself to new concepts, think hard about how you can make them work for you.” Translation: New technology can be your friend. The biggest threat from technology comes from dismissing it or ignoring it.

Granted, the print business model is still producing revenue, in most cases more revenue than online advertising. But that’s ultimately irrelevant when the entire business model is dying. If news organizations want to survive, they need to reinvent themselves. The Knight Foundation is one place to look for examples in innovation. At Knightgarage, you can hear about the projects of the 2011 John S. Knight Fellows. In particular, I recommend the talk by Jeremy Adam Smith, who explains how individual journalists (many of whom were laid off after years with newspapers) are becoming publishing entrepreneurs.

How ironic that journalists who’ve been booted out of the newspaper industry are at the forefront of the New Age of Journalism. And they are doing it without the paper.