When it comes to fashion, tech men rule

When it comes to fashion, tech men rule

I always admired Steve Jobs, but not for the reason you think. The world admired him for bringing creative, beautiful designs to high tech. I admired his clothing, which was practical, comfortable and not particularly fashionable, at least not at first. Wherever he went, he always wore the same black mock turtleneck, jeans and sneakers. He liked it as a signature brand, but also because it was convenient. He never had to worry about what to wear. 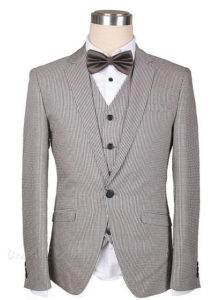 In fact, many Silicon Valley entrepreneurs and executives follow a similar dress code: casual, comfortable and monotonous. For Mark Zuckerberg, it’s the gray t-shirt and hoodie. And, like Jobs, he does it so he doesn’t have to expend any of his valuable brainpower on such superficial decisions as what to wear. Aspiring male entrepreneurs worldwide emulate this approach. On a recent trip to Japan, I met two of them. One wore jeans, a t-shirt and the di-rigueur hoodie. The other sported a black leather Superdry jacket, a brand that’s all the rage in the Valley, with a plain white collared shirt. (He also served visitors Blue Bottle coffee, another hot Valley brand.)

That dress code, however, doesn’t apply to women. Female entrepreneurs and executives are held to a different fashion standard. Googling images of women in tech, I didn’t find a single black turtleneck or hoodie. Take a look at the slide show accompanying Forbes’ article on the most powerful women in tech. The most consistent piece of clothing is the dark blazer, still a stodgy, corporate look, unless paired with jeans. I can’t tell because most of these are just head-and-shoulders shots, but judging from the style of the blazers, I would guess the women aren’t wearing jeans. Neither can I see their feet, but I bet there are no sneakers in the bunch. What about startups? Certainly there is a more casual dress code there. But look at the variety in “70 Startup Women Show Us What They Wear to Work.” The first photo shows a black blazer (with jeans), but after that the clothes are anything but monotonous.

There are fewer women in positions of power in the technology industry, but that’s all the more reason for them to leave fashion considerations behind. They need to conserve that brain power for figuring out how to get past glass ceilings.

Yet I see no signs that the double-standard dress code is changing. In fact, some media coverage seems to reinforce the bias. Take a look at this San Francisco Chronicle story from last year about how “women are hacking the tech dress code.” Instead of criticizing the double standard, the article raises the already high bar for women. Today, fashion for tech women requires “more nuance and strategy than ever before,” says the branding consultant quoted in the article. He says it’s OK for male engineers to wear jeans and sneakers. Then he goes on to warn about the impact clothing can make. Tellingly, he uses the female pronoun. “People will say, ‘You know, that person is so smart, why doesn’t she have a clue about how to dress herself better? And why doesn’t she take better care of herself? Do I really want to trust that she is making good workplace decisions?’” I don’t hear anybody questioning the intellect or management prowess of a man wearing a hoodie in Silicon Valley.

What we need is one female entrepreneur or executive to step forward and lead the way. How about it Sheryl Sandberg or Marissa Mayer? Black yoga pants and gray t-shirt, anyone?