The old guard has passed, which is good news for freelancers

The old guard has passed, which is good news for freelancers 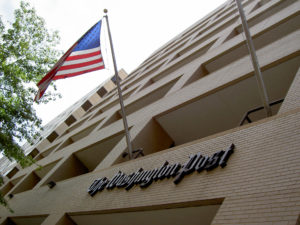 Last week’s sale of two major American newspapers to billionaires outside of the traditional media industry was the death rattle of Industrial Age journalism. It has been sick for so long, it’s about time someone put it out of its misery. For years, the Internet has ravaged the dead-tree news industry – an industry based on old production and distribution methods that hadn’t a chance in the Digital Age (see “Journalism is dead; long live journalists” ), but most publishers were either in denial or at a loss about what they could do about it. The sales of The Washington Post and The Boston Globe are shocking only because they are a striking admission by traditional publishers that they just don’t know what to do. They have finally given up.

Fresh thinking by smart people experienced with Internet-based business models and unburdened by vested interests in the old ways are just what the newspaper industry – and journalism in general – needs. And it bodes well for freelancers. These new owners understand more than traditional publishers how to create valuable digital products that consumers are willing to pay for. And at least one of the new owners – Jeff Bezos – has a proven track record of forging new business models that directly compensate the individuals who create that value.

Bezos, CEO of Amazon.com and new owner of the Post, based his company on the disintermediation of distributing goods, including the media of books and movies. John Henry, the owner of the Boston Red Sox and now of the Globe as well, brings less digital cred. But it’s worth noting that MLB.com, a property of MLB owners, is the most successful digital venture of all sports. And Henry is a patient, long-term investor like Bezos. “We think the management styles of these investors symbolize the kind of long-term view that the business badly needs,” writes Paul Gillin on his Newspaper Deathwatch site. Gillin, a veteran technology journalist and consultant, a New England native and a Red Sox fan, points out that Henry has patiently invested in the Red Sox for years, helping it break the 86-year Curse of the Bambino by winning the World Series in 2004. Henry also saved and renovated Fenway Park, rather than tearing it down as the previous owners had threatened to do.

Bezos understands that the Internet is a direct connection between reader and journalist. His book publishing operation lets writers publish themselves and keep more of the royalties. And he created Kindle Singles, which allows journalists to sell long-but-not-book-length articles directly to readers. This direct-publishing model could prove to be a great business model for enterprising freelancers. Similarly, Amazon is backing independent film and TV producers, giving them a way to go around the traditional Hollywood power structure to reach audiences. “Bezos isn’t trying to kill the media business,” says a recent Businessweek article. “He’s trying to reinvent it, racing against the likes of Apple and Google to build the most comprehensive array of devices and innovative online news and entertainment services.”

Both Bezos and Henry appreciate the value of data analysis. Henry was an early adopter of the “Moneyball” approach to baseball pioneered by Oakland A’s Manager Billy Beane, and even tried to hire him. Bezos’ Amazon is undisputedly among the most savvy innovators of data analytics. A large part of his business is based on crunching numbers on customer likes, dislikes and who knows what else. In his letter to the Post staff, Bezos alluded to the potential: “Our touchstone will be readers, understanding what they care about – government, local leaders, restaurant openings, scout troops, businesses, charities, governors, sports – and working backwards from there.”

Nobody knows what lies ahead for the newspaper business. I’ve been excited for years about the way the digital revolution is opening up new doors for freelancers. It’s one of the reasons I decided to pursue a freelance career. Now, I’m even more excited about the prospect that smart, tech-savvy publishers will build new business models that help the news industry, and the people who work in it, not only survive but prosper.