The iPhone: A Swiss Army knife for reporters?

The iPhone: A Swiss Army knife for reporters?

Neal Augenstein is a one-man multimedia news crew. But the reporter, who works for Washington, D.C., talk radio station WTOP, does not schlep heavy, expensive video and audio equipment as he drives around the metro area covering breaking news. Instead, he uses his iPhone. With his phone, a charger, a few apps, a $2 piece of foam and some practice, Augenstein says he’s able to produce fairly good quality audio and video reports for the station’s radio station and website. 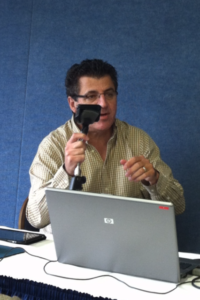 WTOP reporter Neal Augenstein demonstrates a gerry-rigged mic clip for the iPhone, using a traditional mic clamp and a scrap of foam to wrap around the phone.

Augenstein explained how he does it at a professional development session on “iPhone Reporting” last week at the National Press Club. As technology brings radio, TV, print and web together in one big mess of media, journalists are increasingly called on to do a little bit of everything, like it or not. And don’t expect any training, even if you are a full-time employee. Augenstein took the initiative at WTOP, educating himself on the capabilities of the iPhone (and later the iPad), and then producing reports that convinced WTOP of the viability of the iPhone as a sort of reportorial Swiss Army knife.

Augenstein makes it sound easy, but of course for most of us it’s not. For a print reporter like me, audio and video are intimidating. I couldn’t even figure out how to get my iPhone to record audio during his presentation, and was too embarrassed to ask. And who has time for the “practice” part, when our priority is meeting the next deadline so we get paid?

I did manage to snap a photo of Augenstein (right), the quality and composition of which will convince editors that I should stick with words. I even used one of his tips on how to edit the photo on the spot and e-mail it to your editor. After taking the photo on the iPhone, size it and crop it on screen using your hand (pinching or spreading your fingers). Then take a screen shot by simultaneously pressing the on/off button and the home button. The newly cropped photo appears in your camera roll, and from there you can e-mail it to your editor (or in my case, to myself so I could put it on my website.)

A few other things I learned:

• YouTube isn’t the only online broadcasting platform out there. Check out Ustream. While YouTube is more commonly used to store and show recorded videos, it appears that Ustream is more like live TV, showing events as they happen in real time. (When I tuned in, the Arena Football Club of Des Moines was broadcasting a game between the Iowa Barnstormers and the Chicago Rush.) With an app called Ustream Broadcaster, you can tweet your broadcasts.

• Augenstein uses SoundCloud (which he called “YouTube for audio”) to store his audio clips. It has a free app that allows you to tweet your audio clips.

• The iPhone is sensitive to wind, even light breezes. You can solve the problem by slipping a standard microphone wind sock over the mic end of the phone. Augenstein says it worked so well that he was able to cover a hurricane using his iPhone.

I’ve heard plenty of complaints about the sound quality of the iPhone’s built-in mic. Augenstein admits the quality isn’t as good as using a professional mic and high-end digital recorder, but says it’s good enough. If you put professional equipment audio quality at 100 percent, he estimates iPhone quality rates about 92 percent in comparison. And he expects that new equipment add-ons for the iPhone, specifically an external mic due out in April, will improve that to 95 percent.

I’m not exactly a roving reporter, and probably won’t be using my iPhone to record audio and video. Honestly, I barely remember to tweet when I’m at an event. But it was fascinating to learn what Augenstein can do with the technology in the palm of his hand. More of his tips can be found on his blog on iPhone reporting.