The cross-pollination of the freelance business

The cross-pollination of the freelance business

The first time I quit my job to freelance full time – 1989 – I learned how valuable referrals are.

My former employer started using me as regular contributor. I hadn’t planned on that, but I had left on good terms, and apparently they missed me. It was a good deal for the publication as well as for me. The editor already knew how talented, reliable and thorough I was. And I already knew the publication’s style and readership. I could report and write great stories in half the time it would take if I were working for an unfamiliar magazine, so my projects for them worked out to a nice hourly rate. 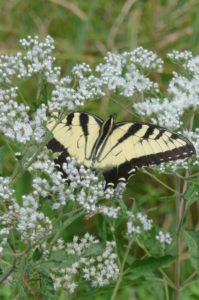 Then, as editors and writers from that publication moved up or out to other jobs, they continued to hire me for freelance work. It was a wonderful sort of cross-pollination. Like butterflies, people for whom I’d worked flitted off to a new flower, and then offered new opportunities to me. Many times I not only added a new client, but continued working for the old one as well. Thus, my client base grew.

Today, however, the publishing industry is consolidating. As more and more magazines and newspapers close, more of my colleagues are being laid off. Given the state of the economy and of journalism, they aren’t necessarily landing on a new flower right away. Many have become freelancers by necessity.

And yet, the cross-pollination has continued. Most of my new clients still come from referrals from former editors or freelance colleagues. A few recent examples:

A former colleague who’d been freelancing for the last several years just took a full-time job editing blogs for a major trade publisher. Not only is she handing off at least one of her freelance clients to me, she also has hired me to do some work for her new employer. On top of that, she’s in a position to circulate my name to other editors at other publications the company owns.

A former editor took a job at a custom publishing company. He has hired me for regular contributions to an online newsletter for one of his clients.

A freelance colleague and former editor has found himself suddenly buried in work. Rather than say no to a valuable client, he referred them to me.

I’m amazed, and grateful, that this process continues. In this time of upheaval in the publishing business, maybe even because of it, there is still work out there. It’s just more difficult to find. That makes referrals especially sweet.