I’ve often wondered whether it would be more equitable, and more profitable, to be paid based on the number of people who read, “like” or “recommend” my stories. Among those clients who share these numbers with me, my articles rank consistently high.

Meanwhile, after having watched the explosion of digital publishing over the last year, I’ve increasingly wondered whether I might be able to publish and sell my articles to readers directly.

After attending the Maryland Writers Association (MWA) annual meeting in early April, I’m convinced that at least some journalists could do this and make more money than the typical freelance fee for any given article. The MWA is primarily for fiction writers, and the panel discussions focused on book publishing, but what I heard there only reinforced my belief that an exciting new publishing and distribution model is opening up for writers of all kinds, including journalists.

More and more authors are publishing e-books through companies like Amazon and Smashwords, and making good money doing it. The poster girl for this is the young writer Amanda Hocking, who has made more than a million dollars publishing her short novels on the Kindle. After slowly creeping up on them for years, disintermediation has finally hit the “legacy publishers” (as the participants of one panel at the MWA meeting insisted on calling them) hard. 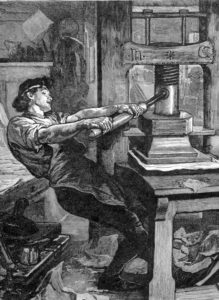 This entertaining (but very long) discussion of e-book publishing between authors Barry Eisler and Joe Konrath lays out the reasons behind the self-publishing stampede. You don’t have to read the entire 13,000 words on the business reasons, including an explanation of the revenue math, to be convinced that self-publishing is at least worth a try. These quotes reverberate in my head:

On distribution of stories: “Print is just a delivery system. It gets a story from the writer to the reader. For centuries, publishers controlled this system, because they did the printing, and they were plugged into distribution. But with retailers like Amazon, B&N

[Barnes & Noble], and Smashwords, the story can get to the reader in a faster, cheaper way.”

On the worth of writers, aka content producers: “We provide the content that is printed and distributed. For hundreds of years, writers couldn’t reach readers without publishers. We needed them. Now, suddenly, we don’t. But publishers don’t seem to be taking this Very Important Fact into account.”

I heard variations of these themes all over the MWA conference. One panelist predicted that within five years, more than 50 percent of all books will be e-books. How much journalism is already consumed digitally today? Probably well over half. And with the iPad and other tablets starting to breathe visual life into digital newspaper and magazine stories, it should increase astronomically.

Why not package and sell single articles? I’m aware of at least one experiment in selling digital long-form journalism singles: the Atavist. The articles are by well-known journalists, of course, to appeal to the general public and attract as many buyers as possible.

Would this work in trade journalism? One of the literary agents at the MWA meeting, Jessica Sinsheimer of the Sarah Jane Freymann Literary Agency, encouraged authors to aim for niches rather than the mass market. The more narrowly defined the market, she said, the easier it is to sell the story. That’s the whole idea behind trade publishing: niche audiences – CEOs of technology companies, for example – want articles that deal with the issues and events that are most important to them.

Would they pay for that? What if a journalist wrote an article of 5,000 words that brought them new, useful information that could make a real difference in their life, career or company? Going the traditional route, that journalist might expect to make $5,000 to $7,500 for that story. What if she published her own e-story and charged $10 a pop? Based on Konrath’s figures that an author can keep 70 percent of the revenue when publishing on Kindle, she’d have to sell at least 1,000 copies to reach that $7,500. Just as important, however, is the fact that she would retain the rights to that article. Maybe she could later sell it to a couple of “legacy publishers,” or publish it as part of a longer book.

Effective social networking could be the key. If a writer is to have any hope of selling her own stories, she has to have developed a personal readership – people who know her and want to read her stuff. Another publishing agent on the panel, Jason Allen Ashlock of Movable Type Literary Group, stressed how important it is for writers to build and grow their reputation and relationship with readers. Not only does it help promote the writer, but it also feeds the writer good ideas for future stories. By communicating with readers, a writer can learn what her audience wants. And if her stories deliver what her audience wants, she should be able to sell more of them. It becomes a virtuous cycle. When readers are being overwhelmed by the vast universe of digital information, hitting a reader’s sweet spot becomes very valuable. “Where there’s an abundance of content, then quality content becomes your marketing strategy,” said Ashlock. “Business models can be built around good content.”

The next few years will tell whether and to what extent individual journalists will be able to profit more directly from their work. Regardless of what happens, the “freelance” in freelance journalism is starting to take on a whole new meaning.