The Internet enables my career, and to an increasing extent, my life. I spend hours online every day communicating with sources, editors, colleagues and friends not only by e-mail but also via social networks like Facebook and Twitter. I spend even more time using Google to conduct research for various stories. (Remember when we reporters actually had to use the telephone and go to the library?) I do a substantial amount of my shopping online. I do virtually all of my banking online.

But what if someone suddenly pulled the plug on the Internet? My work and much of my life would come to a halt. I’ve been thinking about that ever since Wikipedia and other sites went dark a couple of weeks ago to protest the Stop Online Piracy Act (SOPA). An effort to fight online violations of copyright and intellectual property, SOPA would have expanded the power of U.S. law enforcement over Internet service providers (ISPs). It would’ve allowed the government to bar ISPs and search engines from linking to or conducting business with websites suspected of aiding and abetting violators, and could require them to block access to such sites. (A good explanation of SOPA can be found here.)

I agree with the opponents of SOPA, who said that the bill threatened free speech and innovation. I’m glad the bill was defeated. But it wasn’t defeated because opponents won the argument. It wasn’t even defeated by lobbying muscle. (Google last year spent $9.7 million on lobbying, an increase of 88 percent over 2010.) Rather, it was defeated by extortion. 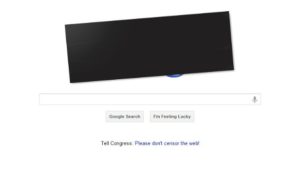 Google purportedly considered shutting down its search engine for a day, but the company wisely refrained. It settled for covering its logo in black to protest the proposed legislation. Even without the participation of Google, the Internet strike peeled back the curtain to show how dependent we’ve all become on the Internet in our daily lives. As Larry Magid put it in The San Jose Mercury News, “Tech companies flexed their muscles Jan. 18 and we found out that they’re a lot more buff than many had thought.” Virtually all of the key players on the Internet – including Microsoft, Yahoo, Facebook and Twitter – opposed SOPA. What if they had all shut down? For that matter, what if the major wireless providers also joined in? Just try going through a day without using wireless technology and the Internet. How would you find your way to that off-site meeting? Still got a paper map in your car? But what about traffic jams? Turn on that AM radio. Need to call because you’re running late? Dust off your phone books, if you still have them. And good luck finding a pay phone.

I know what it’s like to be at the mercy of a service provider. My neighborhood is on a bad part of the electricity grid. We have old lines and large trees, so when the wind blows we sometimes lose power. It’s infuriating that my service literally depends on which way the wind blows. But I’ve found that I can get by without air conditioning, refrigeration or heat (we have a fireplace). The real worry for me was my lost connection to e-mail and Internet. So now I use 3G. When the power goes out I can still get e-mail on my iPhone and access the web on my iPad

Now my informational lifeline feels threatened. My access to electricity may depend on the vagaries of weather, but my utility has never threatened to cut my power because they don’t like proposed legislation. My access to the Internet depends on a few powerful technology companies. And they have made that threat. Whether they carry it out apparently depends on the vagaries of the political winds.