Millennials: a new force in freelancing

Millennials: a new force in freelancing

The future of freelancers looks bright, according to a report published last week by Freelancers Union and Upwork. The report, an update of a landmark report last year from the same organizations, finds that over a third of all U.S. workers – some 54 million – are freelancing.

That number is a bit misleading, because the organizations’ definition of “freelance” includes temp workers, people with full-time traditional jobs who moonlight, and people who do a mix of traditional part-time jobs and freelance work. But people dedicated to working for themselves full-time constitute 41 percent of the 54 million, still a substantial number.

The report, based on a survey of more than 7,000 U.S. working adults in the summer of 2015, finds lots of optimism among freelancers. Sixty percent say they freelance by choice, up from 53 percent in last year’s survey, and 50 percent say they would not stop freelancing for any amount of money. In fact, 60 percent of those who’d left traditional jobs to start freelancing earned more than they made at their traditional jobs, often within their first year of freelancing.

The top reasons respondents cite for going freelance route are: 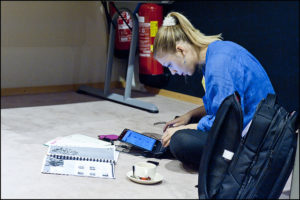 And the top ways they find work are:

These numbers won’t surprise any one who has been full-time freelancing for years. But what’s particularly exciting is the optimism respondents expressed about their future. A third of those polled see more demand for their freelance talents and almost half expect their income to rise in the next year. Among full-time freelancers, 58 percent expect to see their income go up. The vast majority of total respondents – 83 percent – say they think their best days of freelancing are ahead of them. That statistic is up from 77 percent in the 2014 survey.

Millennials are particularly stoked. The age range of 18 to 34 years old forms the single largest group of freelancers, making up 43 percent of total respondents. Perhaps that’s just a reflection of the hard time some of them have had finding traditional full-time employment. At the same time, millennials seem to be making the freelance life work for them. This group is more optimistic about the future of freelancing than any other, says the report. Eighty-four percent of millennials say they would recommend the freelance work style to friends and family, compared to 74 percent of respondents 35 and older.

Experiencing the freedom and thrills of freelancing at an early age, these millennials may be reluctant to work at a traditional 9-to-5 job, even if they have the opportunity. An IT freelancer in my recent Computerworld article turned down an offer from Microsoft. Another IT millennial actually left a good job at Microsoft in order to freelance.

Such stories signal that this generation could be the tipping point that forces the government to recognize freelancing is the future of work and that it will have, indeed already is having, major impacts on our society.

“This is more than an economic change,” says the report. “It’s a cultural and social change on par with the Industrial Revolution. Just as the move from an agrarian to an industrial society had dramatic effects on all social structures around civil rights, workforce participa¬tion, and even democracy itself, so too will this shift to a more independent workforce have major impacts on how Americans conceive of and organize their lives, their communities, and their economic power.”