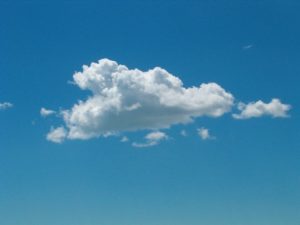 Every few years, some big trend comes along in the technology industry that drives marketing spending through the roof. It creates a flood of advertising in the trade publications and a tsunami of marketing materials, such as white papers and case studies, as companies scramble to position themselves on the cutting edge of this new trend, whatever it is. In the 1990s, it was the Internet itself. Many of us journalists remember the “Everything Internet” wave, when our publications were booming and people who could write about the Internet and World Wide Web were golden. In fact, more than a few journalists, including my boss at the time, were lured by high salaries and stock options from their lowly profession to join Internet startups.

Today, it is Cloud Computing. “The Cloud” may indeed change computing forever, but no one really understands quite how yet. That doesn’t stop people from writing about it, however. Companies are again clamoring for people who can write about the nebulous technology. Publications want to be regarded as the most authoritative source of cloud news. (One editor told me: “We want to be known as the expert on all-things-cloud.”) And yet few really know what they are talking about. In most cases, it’s more like a Rorschach test, with companies projecting what they hope cloud will do for their business. They spend big on advertising to crow about how their products and services relate to the cloud. And they churn out a never-ending stream of white papers and “thought-leadership” articles to show that they understand what cloud computing is and how it will affect the industry.

It’s whistling past the graveyard. The basic idea of cloud computing – that someone else owns and runs the computer and you just buy the service (like Google Apps) – is scaring most hardware and software companies to their core. After all, what happens to their business model if most individuals and corporations no longer buy computers or applications? Better to talk loudly about how cloud actually creates a need for whatever they are selling.

For freelancers like me, who specialize in technology and business, cloud computing has been a boon. Last year, as companies started recovering from the economic body blow of 2008, they restored marketing departments’ budgets. After a very lean year in 2010, I suddenly had a wealth of assignments all about the cloud. Take any topic that I might otherwise have written a story about a couple of years ago – computer security, for example. Now it is a story about computer security in the cloud. Mainframe computers? How mainframes can be used to create clouds. Storage technology? How to store data in the cloud. At least 50 percent of my work last year was related to cloud. And so it seems to be going this year as well.

We journalists like to complain about the hype in the high tech industry. We sometimes accuse marketers of trying to create FUD (fear, uncertainty and doubt) in order to sell their products. But, at least in this case, the FUD fallout from cloud is selling my product and paying my bills. Let it rain!