As every freelancer knows, working from home has its pros and its cons. Among the pros: spending all that extra time with family. Among the cons: having family assume that since you’re there, you’re always available to them. We’ve all had to manage this delicate balance. 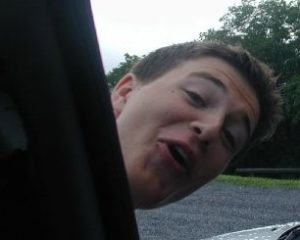 I’ve adjusted to different types of interruptions as my son has grown. When he was a baby, his schedule ruled. Until he went to daycare, I crammed my work into the short slots of time between naps, feedings and play dates. As he grew, the types of interruptions changed. As a boy, he sometimes seemed to demand my uninterrupted attention just when I was in the thick of a conference call. But he gradually learned to refrain from interrupting me when I was on the phone, “unless there’s blood or fire involved.” (We later added water to that directive, after he shyly and sheepishly called down the steps to me one day that water was coming through the ceiling. The upstairs toilet had overflowed and he was trying to stem the tide by himself.)

Even now, at age 18, he sometimes bounds into the house – if he’s with with his cadre of friends, it sounds like a herd of elephants – and starts asking for money or the car before he even reaches my office, only to find me with the phone to my ear, glaring at him. 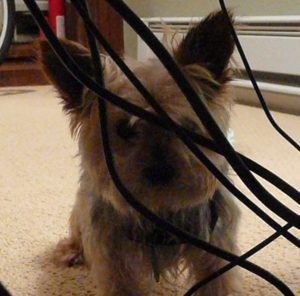 As kid interruptions subsided, pet interruptions escalated. There was always the dog, whimpering at the front door for a walk. As he reached middle age, my Yorkie developed seizures. Many times I conducted an interview while stroking and comforting his quivering five-pound body splayed out on the floor. He also had stomach problems. I became expert at discerning the distinctive retch in time to scoop him up off the carpet and onto the hardwood floor (for easier post-interview clean-up).

That dog now is also 18. He’s blind, deaf and arthritic, and sleeps most of the time. Still, when he wakes up and figures out I’m not in the same room, he goes hunting for me. He’ll sit at the top of the stairs whining until I come to carry him down to my first-floor office. And I’ve learned that I can’t ignore that whine for long – he’s tumbled down those stairs more than once.

Like an old man with Alzheimer’s, he sometimes wanders aimlessly around my office. He usually ends up ensnared in the nest of wires and cables behind my desk. I know he’s back there when my speakers start inching away from me.

Soon, both son and dog will leave – one for college and the other for the great beyond. It will be quiet around here. My work days will run more smoothly. Gone will be all those interruptions. And I’ll cry, missing them terribly.