Keeping up with the phones

Keeping up with the phones

I used to think I didn’t need a mobile phone because – frankly – I’m not very mobile. But as phones become smarter they are becoming the prime line of communications for most people. I’m finding it’s increasingly difficult to function without an up-to-date phone. 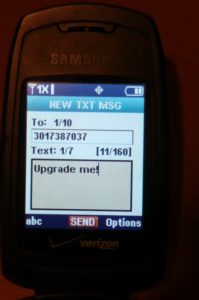 My primary reason to have a mobile phone was always so I could be reached in an emergency. I never liked the quality of cell calls, and much preferred to do my talking on a landline. A couple of years ago I got tired of being locked into contracts that made me pay for minutes that I never used, so I’m now on a pre-paid option of Verizon’s. I bought my own phone – one of the cheapest available at the time – and I buy minutes in increments of $15, which covers about a month’s worth of my calling and texting.

I do virtually all of my work in my home office, which is equipped with two landlines and a broadband cable connection. With all these lines of communication in my home and office, why would I need to use my mobile phone as well?

Several recent events have shown me why. For one thing, more and more people consider mobile phones as the primary means of reaching someone. In fact, young people text and Facebook on their mobile devices far more than they talk. So much so that my teenage son rarely checks his voice mail, or even his e-mail for that matter. And he assumes that everyone else is like his crowd. Last week, for example, he didn’t come home at the time he was expected. After an hour of worry, I finally called his mobile phone to make sure he was OK. He was surprised to hear that I didn’t know he was running late. He had texted me earlier to let me know. Since I was at home, I wasn’t checking my mobile phone for messages.

Recently, our region had widespread and lengthy power outages caused by a thunderstorm. With no power and in most cases no broadband, I saw how critical having sophisticated mobile broadband can be. I called my dog groomer about an hour before our appointment to make sure she had power. She had e-mailed me earlier that day to cancel. When I pointed out to her that I couldn’t get e-mail because the power was out, she expressed surprise that I didn’t get e-mail on my mobile phone. That same power outage threatened to cancel a swim-team banquet because the power was out at the building where it was going to be held. But the pool itself had power, so the coach e-mailed everyone an hour before the event, telling them we were changing venues. The presumption was that everyone had a phone or a Blackberry that could pick up e-mail.

As these phones get smarter, I’m missing an important communication channel. It’s time for an upgrade. And yet, I still don’t like the voice quality on mobile phones, and I find it hard to justify the expense when I probably won’t use it often. If anyone can recommend a good compromise between expensive, cutting-edge technology and your basic mobile phone, I’m all ears 😉