Freelancing: a choice not a punishment

Freelancing: a choice not a punishment

With all the doom and gloom in the journalism business these days, freelancers are often depicted as the desperate castoffs of publishing, taking on part-time temporary work because they have nowhere else to turn.

But that’s not true for most freelancers. And somebody has finally done some research that shows how inaccurate that depiction is. Kudos to Ed Gandia, a freelance writer and speaker, who surveyed almost 1,500 freelancers in various professions over the summer and in September published the 2012 Freelance Industry Report. 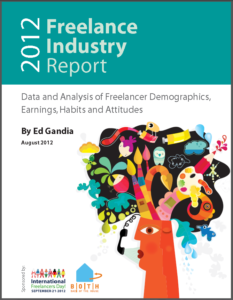 The free, 70-page report gives an excellent, and from my perspective fairly accurate, snapshot of the freelance life. On the whole, it finds that we freelancers are a happy, satisfied bunch. Among Gandia’s findings:

• Women make up 71 percent of the freelance population.

• 47 percent are the primary wage-earners in their families; another 36 percent said their wages were on par with their spouse or partner.

• Asked why they were freelancing, the largest percentage (28 percent) said it was because they wanted more freedom and flexibility in their schedule. Another 23 percent said they wanted to pursue their passion. Approximately 29 percent hadn’t planned to freelance: 14 percent said they just fell into it and another 14 percent were freelancing because they had been laid off.

• 90 percent of freelancers report being happier now than before they became self-employed.

• 55 percent like freelancing so much that they would not consider working as an employee, regardless of what the job was or what it paid. Another 36 percent said they’d consider it, but it would depend on the job.

• More than 60 percent of writers make $50 or more per hour, and a lucky 14 percent make $100 per hour or more. Editors are comparatively poor, with only 30 percent making more than $50 per hour and a measly 2 percent making $100 or more. Interestingly, female freelancers tend to earn more than males.

There’s much more in the survey, including to what extent the economic downturn has affected our business (50 percent report little or no impact). It’s great to have validation for what I’ve been seeing and saying in my own little corner of the freelance world. Most of us are happy, successful and unlikely to go back to a traditional job.